Philip Raffaelli trained as a Doctor at Edinburgh University before joining the Royal Navy as a Medical Cadet in 1976 which was when he first got to know Gosport. He completed a full career with the Navy during much of which he lived in Gosport. His last position in the RN was as the Surgeon General running the Defence Medical Services. His wife, Fiona, has lived in Gosport since she was 14, and their children undertook much of their schooling in Gosport and many of their family and friends live here. They both love Gosport and Hampshire and decided a long time ago that Gosport was to be their home.

In the early days Philip trained as a General Practitioner then became a Consultant in Occupational Medicine with a particular interest in Submarine Medicine. Throughout his career, he has been actively involved in medical education including being the Professor of Naval Occupational Medicine and the Chief Examiner for the Faculty of Occupational Medicine. Amongst his earlier roles he worked at, and then commanded, the Institute of Naval Medicine, and had the honour to be the Chief Executive of the Medical Education and Training Agency for three years from 2004 based at HMS DOLPHIN/Fort Blockhouse.  In recognition of his work he was made a Companion of the Bath in the Queen’s Birthday Honours List in 2012 and retired from the Royal Navy as a Surgeon Vice Admiral in May 2013.

Philip has always taken an active interest in the local community and often worked closely with the Council and other authorities locally whenever he could.

He has seen at first hand the considerable and difficult changes that have faced Gosport as the Navy has reduced in size and the even greater challenges that it has faced during this period of austerity, and has been hugely impressed with how the Conservative Group has worked with all parties for the good of Gosport and its people. Its record speaks for itself. Since being elected as one of the Cllrs for Anglesey Ward, Philip has sat on the GBC Regulatory and Economic Development Boards and Chaired the Standards and Governance Committee. He is currently the Chair of the Community Board and sits on the Climate Change Board and the Policy and Organisation Board. He is also the GBC representative on the Gypsies and Travellers Panel and a member of both the Portsmouth City Council Health Oversight and Scrutiny Panel and the Hampshire Health and Wellbeing Board where his medical background stands him in good stead to represent the residents of Gosport.

As well as working to help constituents with individual problems, Philip has also been very involved with local issues ranging from Fort Gilkicker to the No 11 Bus and has continued to be a strong supporter of many of the local community groups such as the Anglesey Conservation Group, the Friends of Stokes Bay, the Friends of Crescent Gardens and the Diving Museum. He has recently been elected as the President of the Historic Diving Society.

The Friends of Crescent Gardens have won the coveted Green Flag for the 15th year!

There have been increasing complaints about people speeding and racing along Fort Road. A number of residents have started a petition which you can add to at http://chng.it/bLMfFgHhbx 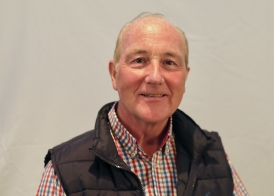