Gosport is my home town and my family had pre WW1 business connections together with a strong military background.

Brought up in Privett where my mother still resides.  I was educated in Portsmouth and as a teenager actively involved in what was then known as Alverstoke Youth Fellowship, a first step in volunteering.

I decided on a career in finance and for forty years I held managerial positions in banking and accountancy.  This introduced me to a variety of volunteer organisations.

At the same time I was granted a Commission in the Royal Naval Reserve. I was awarded the Reserve Decoration and bar for my service.

Coming from a family that was active in the Gosport Chamber of Trade many years ago, I have always nurtured a keen interest in the affairs of the Borough.  Retirement has enabled me to focus upon this and I was privileged to be elected a Borough Councillor in 2002. I have served as Chairman of many of the Council’s committees.  In 2011 I was honoured to be elected Mayor; it was a truly humbling experience to be able to meet so many of the local people who willingly give up their time to foster the wellbeing of others.

In 2009 I was elected as one of two Councillors to represent Leesland and Town Division on Hampshire County Council. This is a large Division comprising seven of the central Gosport Borough wards. I am a firm believer in the Two Tier system of local government and by working in close partnership I can assist in the delivery of local services. Relating to this, in 2010 I was appointed Chairman of the Hampshire Action Team designated to Gosport.  Along with my County colleagues I was pleased to be able to allocate £100k of funding between various organisations to assist in the promotion of Health and Wellbeing. The County Council developed this initiative to provide each Councillor with a devolved budget and I have been pleased to assist many local organisations.

I serve on a number County Council committees including the role of Vice Chairman of Health and Adult Social Care Select Committee; I am also Chairman of Road Safety for Southern Hampshire.

On becoming a County Councillor in 2009 I was appointed to the Hampshire Fire and Rescue Authority and was honoured to be elected Chairman of the Authority in 2015. The HFRA is a Combined Authority encompassing Portsmouth and Southampton as well as Hampshire. The role of the Authority is governance of the Fire Service in its primary role of keeping the people of Hampshire safe. This is broadening with blue light collaboration particularly relating to “Fire as a Health Asset”.

I very much value contact with local residents and will continue to strive to do my best to deal with issues as they arise.

There have been increasing complaints about people speeding and racing along Fort Road. A number of residents have started a petition which you can add to at http://chng.it/bLMfFgHhbx 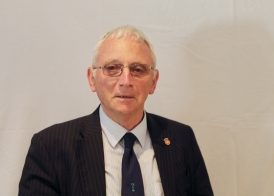