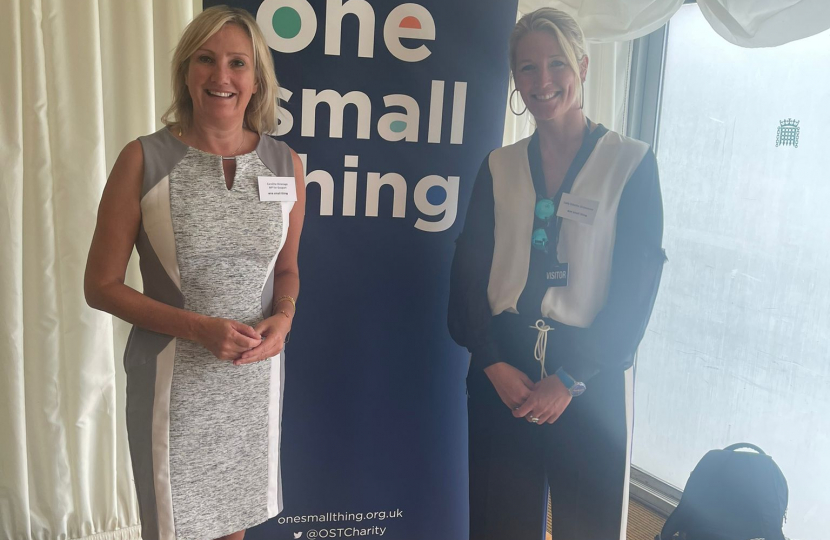 Last week, local MP and former Justice Minister, Dame Caroline Dinenage, hosted an event with One Small Thing Charity on the intergenerational traumatic impact of maternal imprisonment and the need for urgent reform.

Attendees at the event, which included MPs and Ministry of Justice staff, heard from Farhana and Jamilah, who both spoke movingly about the impact of their own mother’s sudden and unexpected imprisonment on their lives. The event also heard from Sophie Mitchell from Northumbria University who has completed her PhD on this very important topic. Her findings highlight a need for urgent reform.

Courts do not routinely take into account the rights of children when sentencing mothers, and One Small Thing are calling for this to change.

Women account for around 5% of the prison population in England and Wales and around 60% of these are estimated to be mothers. Sadly, many of these women have high levels of mental health needs and are often kept on average 64 miles from home, meaning that some children never visit their mothers. This has a profound impact on families, with only 5% of children staying in the family home when their mother goes to prison.

“For female offenders, trauma-informed, gender-responsive programmes are the only way to break the cycle of crime, incarceration and intergenerational trauma.

“Farhana and Jamilah spoke so powerfully about their mother who was unexpectedly given a prison sentence while they and their siblings were at school. Nobody came to pick them up that day and they ended up in the care system, with their belongings in a bin-bag. The youngest was only five years old.  The long term trauma of this is unimaginable.

“I fully support the work of One Small Thing Charity in achieving this and will do what I can to drive change in this area.”

The charity One Small Thing were established by criminologist and Prison Philanthropist, Edwina Grosvenor, who has recently been appointed High Sheriff of Hampshire.

The charity works to redesign the justice system for women and their children. They facilitate trauma-informed and gender-responsive programmes for the prison and community sectors that consider the individual caught in a cycle of crime and incarceration and aim to humanise their process.

"We were delighted to have Caroline’s support to host our Parliamentary Reception on maternal imprisonment, giving us an opportunity to raise this important issue with key stakeholders and decision makers."

"Maternal imprisonment has a traumatic impact on women, the children they are separated from, and wider family members who often have to provide care. This impact can be felt across generations long after a prison sentence is completed.”

“We believe that system reform such as better pre-sentence information at the court and family visit policies in prisons, financial support for kinship carers and access to housing on release would make a huge difference to reduce this traumatic impact. However fundamentally community-based alternatives to custody for women and mothers who would otherwise be serving short prison sentences are the only way forward, such as the project we are piloting in Hampshire called Hope Street. The event also allowed us to raise that data on the number of women with children and pregnant women in the Justice System needs to be routinely collected and published."

Caroline also recently highlighted this issue in the House of Commons in an Oral Parliamentary Question to Ministry of Justice Minister, Victoria Atkins.

Dame Caroline Dinenage, former Health Minister and member of the Women and Equalities Committee, welcomes the committee’s push to amend the Equality Act and introduce menopause as a protected characteristic.