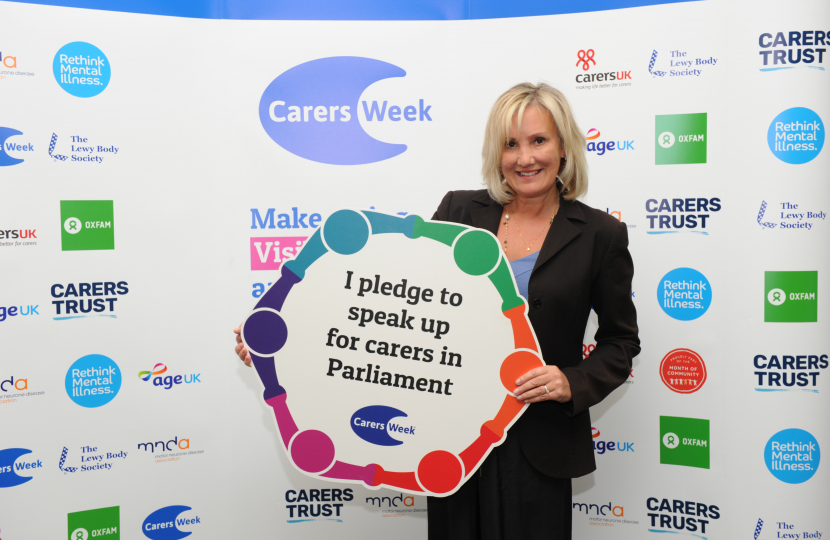 Last week, Gosport MP, Dame Caroline Dinenage, sponsored a Carers Week event in Parliament, giving MPs from across the UK the chance to meet with unpaid carers and the charities which support them and to hear about the campaign for more action to make carers visible, valued and supported.

Carers Week is an annual campaign to raise awareness of caring, highlight the challenges unpaid carers face and recognise the contribution they make to families and communities throughout the UK. It also helps people who don't think of themselves as having caring responsibilities to identify as carers and access much-needed support.

Caroline, a former Care Minister, who is the current co-Chair of the All Party Parliamentary Group for Carers, took the opportunity to meet the carers who had come to the event and to thank the organisations for their work to promote and support unpaid carers.

“ I was proud to sponsor this busy event. It’s important for MPs to recognise the extraordinary lengths carers go to, each and every day, to ensure their loved ones are safe and cared for. Their dedication and commitment, often at great cost to their own livelihoods and well-being, relieves so much pressure from our health and care systems, yet so often this contribution is undervalued and invisible.”

Alicia Jones, an unpaid carer who attend the event, said:

"Having been a government advisor for unpaid carers, it was so lovely to be back doing in person events with parliamentarians. To actually sit down and have the crucial conversations about the reality of being a carer, something that can't be done through a screen. Big thank you to Caroline for hosting such a lovely event"

Many carers are still struggling with the ongoing impact and negative legacy of the pandemic. The continued strain on social care services, many of which remain unavailable to carers, combined with the current cost of living crisis, have left carers urgently needing more support. Tellingly, when asked about their needs, the impact of caring on their own physical and mental health has topped carers’ concerns for the first time, and money worries are affecting millions of carers.

Approximately 10.6 million people are now unpaid carers in the UK, whether that be supporting a relative, close friend or neighbour because of chronic illness, including mental ill-health, dementia, disability, or older age.

There is overwhelming public support for more Government action to help unpaid carers – Carers UK found that 84% of the general public think that the UK governments should provide additional support to unpaid carers, including increased financial support and investment in care and support services so that unpaid carers can have a break. Only 3% disagreed.

Today, Gosport MP, Dame Caroline Dinenage, asked in Foreign, Commonwealth and Development Office Oral Parliamentary Questions, what preparation the Department has made to support the British Overseas Territories in advance of this years hurricane season.