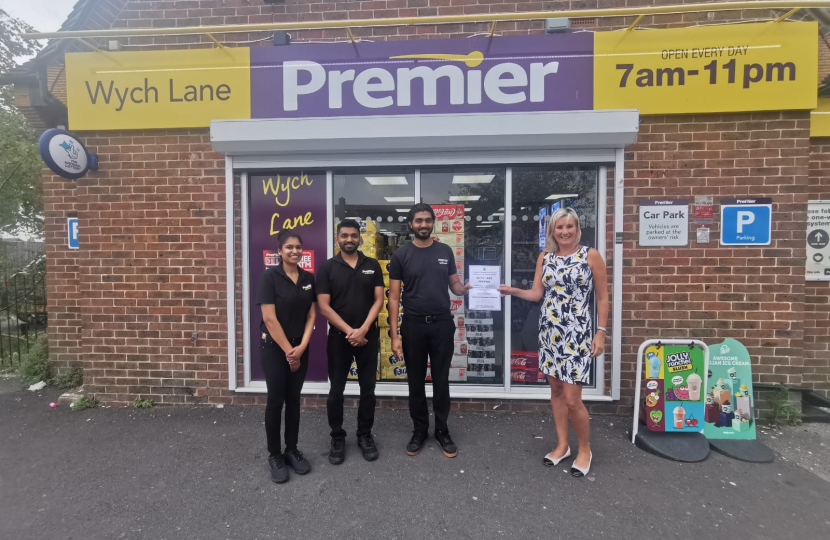 Local MP, Caroline Dinenage, has rounded off her Community Business Champion campaign with a visit to Wych Lane Premier in Gosport.

Caroline’s campaign attracted around 100 nominations in just a few short weeks – with tributes pouring in from local residents about how businesses and organisations had gone the extra mile for them over the past 16 months.

Supriya, Imtiyaz and their team at Wych Lane Premier received the most nominations of the campaign and were described as ‘the pillar of our community’ by local residents. Amongst other things, the team were praised for always going above and beyond for their customers – including offering free delivery and assistance.

Caroline began her campaign back in May with a nominations call that exceeded expectations. Now, some two months later, she has completed her visits and been in touch with all nominees to pass on the comments of local residents.

“Looking back, I am so immensely proud of all those nominated for this campaign and so grateful to everyone for taking the time to nominate.

Over the past 16 months local people in our area have faced challenges like no other but I have always said that our resilient community spirit will get us through.

This campaign has gone to prove just that and I want to say a huge thank you to everyone who has gone the extra mile and made a difference – you are all superstars!”

Elite Offsite are building low-energy, eco homes in the disused MOD munitions site while preserving the listed elements of the heritage site.