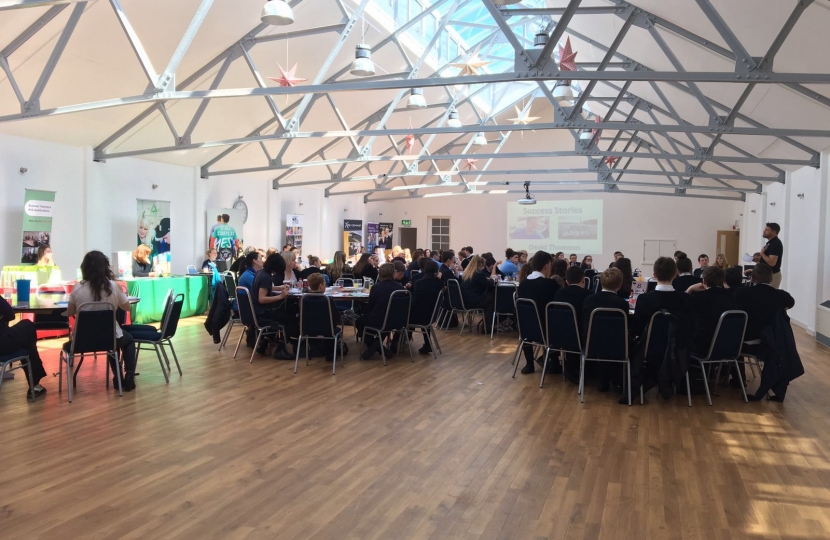 Gosport Youth Council conducted a survey in December 2015 to obtain views from young people living in Gosport. Results from this survey can be found here and amongst the findings, the top three concerns for young people in the Gosport area were: crime; bullying; and career opportunities. As a result of these findings, Gosport Youth Council hosted a Youth Conference, supported by Gosport Borough Council and Caroline Dinenage MP, which focused on the topic of careers for students in Years 10 and above. There were attendees from Bay House, Bridgemary, Brune Park, Motiv8 and Loud and Proud.

The conference consisted of inspiring local young people as guest speakers, workshops on topics such as CV writing and interview skills and stalls with information about volunteering, apprenticeships and much more to help improve the confidence of young people who are applying for employment opportunities. Feedback forms were completed by the attendees and nearly 80% found the whole day useful and enjoyed the event, 14% found just the morning or afternoon of benefit.

"I believe that young people's concerns about the Gosport area should be raised to those who can implement change and this is why I wholeheartedly support Gosport Youth Council and the work that they do. I was delighted to hear how successful their first annual conference was since a break from 2012, with many of the members never running an event like this before.

I have previously held events with Gosport students regarding careers, most recently an Enterprising Women event at Bridgemary School, so I understand the importance of careers as a topic."

"I was delighted to be involved with the Gosport Youth Council's annual conference. It was well attended, well run and extremely informative. For over ten years the Council have taken into account the views of young people, through the youth council, who have helped design skate parks, advised on lighting in parks to additional litter bins and youth shelters Young people have an important role to play in designing the future of their town."

Gosport Youth Council represent you if you are aged between 11 and 19 and you live in the borough of Gosport. They tackle issues that affect young people and get involved in projects such as Gosport Summer Passport, the Royan Twinning and Youth Award 2016. The next meeting is on Wednesday 4 May at 5pm at Gosport Town Hall.