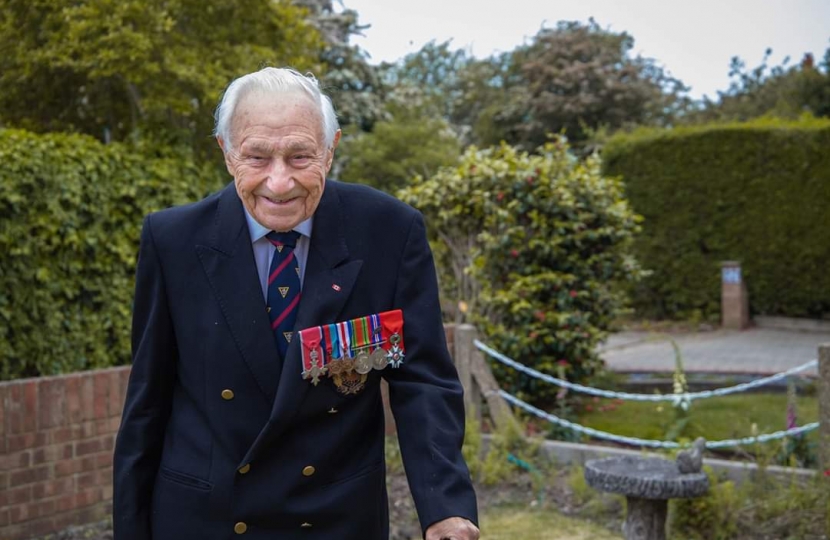 Unfortunately, due to the current pandemic and lockdown, it is highly unlikely that Ron will get to celebrate with his family and loved ones as he self-isolates.

Ron left his joiner’s apprenticeship at White’s Builders in Gosport to join the Royal Engineers in August 1940, playing a key role in the 79th Armoured Division as an Armoured Vehicle Royal Engineer. In 2016 he was awarded the highest military honour from France for his role in D-Day – the Legion d’honneur. Ron has also worked as an occupational therapist for nearly 40 years at the Royal Hospital Haslar where he earned his MBE.

This March, Gosport Borough Cricket Club received a grant from National Lottery to install a bench in Privett Park to pay tribute to Ron who is their longest-standing member.

Ron’s granddaughter, Amy, is asking if anyone would like to send Ron a card for his birthday to commemorate this milestone. Gosport MP, Caroline Dinenage, is encouraging constituents to join her in sending Ron a message of congratulations.

“Ron is a local hero who not only has fought for our country, but served our community for this entire life.

“It is such a shame that this fantastic milestone cannot be celebrated with loved ones, but I hope that local residents will join me in wishing Ron the happiest of birthdays and thanking him for his life’s work.”

All those who would like to send a card please address it to the office of Caroline Dinenage at 167 Stoke Road, Gosport, PO12 1SE by June 1st. The cards will be passed on directly.

Local MP, Caroline Dinenage, is encouraging local businesses to apply for the Queen’s Awards for Enterprise.

The Queen’s Awards for Enterprise looks to identify and encourage businesses of any size, and in any sector, for their work in: