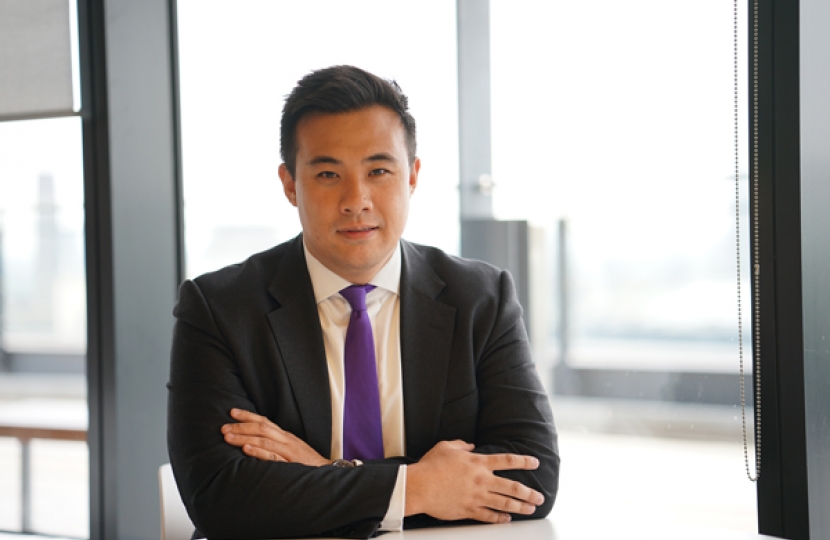 Jackson Ng is the Chairman of the Beaconsfield Constituency Conservative Association. He also serves as a Town Councillor and is a candidate for Beaconsfield Town in the new Buckinghamshire Council 2020 local elections.

Jackson spent his childhood following his father who was a Senior Army Officer for Singapore, working on the Five Power Defence Arrangements, across the Commonwealth. From this international exposure, he is able to speak Chinese Mandarin, Cantonese and some Dutch. After reading law at the University of London, Jackson began his career as a solicitor in London’s West End and soon retrained as a barrister. He now runs his own law firm in Mayfair, London, specialising in Commercial law & litigation, Property litigation and Administrative & Public law. Previously, Jackson has also worked as director at Hill+Knowlton Strategies (part of the WPP group) where he advised international c-suite and senior executives on geopolitics and corporate reputation.

Jackson has a history of campaigning and in 2015, delivered an exceptional result as the Parliamentary Candidate for Liverpool Riverside against a strong UKIP campaign. Furthermore, in the 2017 General Election, he increased the Conservative vote share in St Helen's North by 7.4% having ran an innovative social media campaign.

As the Chairman of the Beaconsfield Constituency Conservative Association, Jackson has revamped the association’s digital and social campaigning, overseen the selection of the new Unitary Council’s candidates, led campaign teams across the constituency and increased fundraising to help marginal seats across the country. He kept members of the Association united despite the turbulent political landscape.

Jackson is a Deputy Voluntary Director of the Conservative Policy Forum where he helps instil grassroot values into policy making at the highest level, with a particularly keen interest in policies that support businesses and economic growth. He also sits on the board of the Conservative Friends of the Chinese; another national group that he helped set up and ran as Director from 2013 – 2017. During this period, he strategised to help win one million new BAME votes for the Conservative Party in the 2015 General Election and encouraged a record number of British Chinese to stand for public office in recent years.

From 2011 – 2017, Jackson also volunteered as a Political Adviser in Parliament working on increasing trade links with Asian economies and has worked on various elements of UK – China bilateral relations.

Jackson is dedicated to social mobility and often mentors young professionals via a not-for-profit organisation that he co-founded. Jackson was previously a trustee of a national charity and also advised the UK's leading charity for engaging students in enterprise.

Jackson lives in Buckinghamshire with his wife, their young twin daughters and Alexandra, his cockerpoo dog. They enjoy walks in the countryside and enjoy meeting local parents and sharing parenting stories. Jackson is a strong member of the local community and acts as a school governor and board member of his local church.